How to prevent childhood obesity: News from the IDEFICS study

Stimulating children to exercise by creating an environment with enough green space, sports facilities and playgrounds may be a simple means to combat obesity in children. At the same time parents have to make sure that their children get enough sleep during the night. These are the latest results of the European Commission-funded project IDEFICS (Identification and prevention of Dietary - and lifestyle-induced health Effects In Children and infantS).

In 2007 and 2008 we already reported about the aims and some first results of the large European IDEFICS study.1,2 This project investigates the health effects of diet, lifestyle and social environment in European children aged 2-10 years. The researchers have developed, implemented and are now evaluating specific intervention approaches to reduce the prevalence of diet- and lifestyle-related diseases. Recently, important new results from this study have become available.3

Increasing waistlines from North to South

The study showed that about one in five children live with obesity or overweight. Generally across Europe more girls than boys below the age of 10 have excess weight. Between the IDEFICS intervention countries, the prevalence of children affected by obesity was higher in the southern part of Europe (up to 20%) than in the Northern part of Europe (below 5%) (see Figure 1). This coincided with a higher frequency of eating while watching TV in the Southern part compared to the Northern part of Europe; only about one quarter of the Swedish children did so sometimes or often, whereas about three quarters of the Italian children ate in front of the TV. Whether eating while watching TV may be one factor related to the development of obesity, remains to be determined. 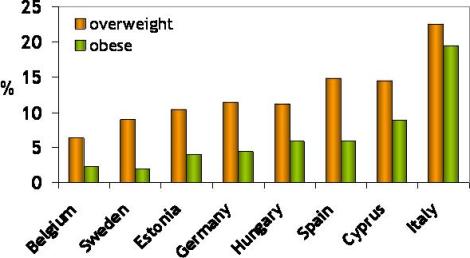 The IDEFICS survey showed that children from Sweden drank by far the lowest amount of sugar-sweetened beverages such as sodas. Also – in accordance with cultural habits – none of the Swedish children reported to eat more than 3 candies per week and only 1% of the children reported to eat chocolate and candy bars more than 3 times per week. Likewise, they ate very few biscuits and cakes. Almost 40% of the Swedish children reported to eat fresh fruits at least once a day, and they also had the highest raw vegetable consumption with almost 60% reporting to eat raw vegetables at least 1 to 3 times per week. This behaviour most closely resembles a balanced diet with plenty of fruits and vegetables and in which sweets and chocolate are enjoyed occasionally as treats.

On average, about half of the pre-school children (2 to 6 years) reported to eat cooked vegetables at least once a day except for Cyprus and Italy where this figure was only 20%. Since intake of cooked vegetables was lower in the older children, efforts should be directed at maintaining, if not even increasing, vegetable intakes over time.

One of the key results from the IDEFICS study is that there is a strong association between sleep duration and the risk of developing obesity or overweight. The researchers counted the hours of sleep from Monday to Thursday, as a measure of the usual sleeping time. Children going to pre-school who slept less than 9 hours per night had a significantly higher risk having excess weight. Moreover, children going to school who sleep less than 11 hours had a 40% higher risk of developing overweight, and even a 300% higher risk if they slept less than 9 hours. The potential sleeping time was usually spent watching TV or playing video games. This was especially true for boys. So making sure that children get enough time to sleep may be one strategy in the fight against childhood obesity, and reducing media time seems an obvious target.

The IDEFICS study showed that children who exercised more (sports or walking/biking to school) and those who had less than 14 hours per week screen time (TV, DVD, computer), were less likely to develop overweight or have obesity. They also asked the children to do a running test to evaluate the physical condition of the children. As expected the boys are in better physical condition than the girls. Still the level of physical condition appears to decrease with age in both boys and girls when comparing 6 and 9 years-old!

It is thus clear that we need to stimulate children to be more physically active. Researchers therefore investigated 344 school children in Germany to see if their daily exercise levels were linked to the movability of their surroundings. The movability was defined based on the connection of streets, the density of footpaths and biking lanes, the amount of and distance to playgrounds, green space and sports facilities. According to their parents, children living in areas with high movability (a high access to play and outdoor exercise) were on average at least 15 minutes more engaged in outdoor activities than children living in areas with low movability. This information is important for political actors in municipalities and for those who plan new housing and environmental structure. If we want to encourage children to be physically active, we have to provide them with the surroundings that make it easier for them to do so.

Next to sleep and physical activity, the family background is an important factor related to the development of overweight and obesity in children. The education and income of parents is clearly related to the weight status of the child: children from parents with a low income had a 50% higher chance of developing overweight or having obesity when compared to children from parents with a high income. This effect can partly be explained by lower diet quality in the low income families. Also children from a family with a migrant background are more likely to have obesity, although this was not found in all European countries of the study. Notably, children from single-parent families are more prone to living with obesity, compared to children from two-parent families. Moreover, children with at least one parent affected by overweight or obesity were more likely to have overweight or obesity themselves.

The IDEFICS researchers evaluated the taste preferences of 1,575 children aged 6 to 9 years. Every child was given a pair of foods to taste and then had to choose which of the two they liked more. The pair of foods consisted of either two crackers or two glasses of apple juice. Each time the pair consisted of one basic food (normal cracker or juice) and one modified food. The modified foods were crackers with extra fat, extra salt or extra monosodium glutamate, or apple juice with added sugar or flavour. They found that children who had overweight or obesity had a higher preference for the juice with added sugar than children of normal weight. Similarly, these children preferred the cracker with added fat. The children who preferred the high-fat cracker ate more high-fat foods during the week. None of the children had a preference for crackers with extra salt or extra monosodium glutamate. These results were the same across the different European countries.

Care for the heart needs to start early

In total 16,224 children from 2 to 10 years old and their parents participate in this large European study.4 The following countries are involved in the study: Belgium, Sweden, Estonia, Germany, Hungary, Spain, Cyprus and Italy. This means that there is a good representation of the different regions in Europe. The researchers performed numerous measurements in the children and their parents, ranging from simple questionnaires about their eating habits and measuring weight and blood pressure, to taking measures in blood and urine. In 5,000 children DNA samples were taken for genetic studies. Combining information from the different research centres presented a major challenge in designing the dietary survey, given the large differences in food availability and dietary patterns between countries. The researchers were able to standardise all measurements taken in the different countries to ensure a high quality of the data and to be able to compare data between the countries. These standardised measurements are very important since they can be used for future multinational studies.

The final phase of the IDEFICS study

The researchers will furthermore look into the gene database that has been created, to investigate how these genes are related to obesity and related conditions such as insulin resistance, in combination with various lifestyle factors.

Finally, the researchers will continue to follow the children after implementing several dietary and lifestyle changes. They want to see which changes are effective and which initiatives contribute most to the prevention of overweight, obesity and related disorders. In this way, new prevention strategies, including guidelines and recommendations, can be made after the study has finished.