The ocean plays an important role when it comes to securing food and nutrition for many people around the planet today, but it holds even greater potential as part of a sustainable food system in the future. Microalgae have gained increased attention as they present a more sustainable source of protein than other conventional sources, such as livestock. But can these unfamiliar ingredients be used to create new types of high-protein food products, and will people be willing to eat them?

Microalgae, also known as phytoplankton, are tiny plant-like microorganisms that live in various aquatic environments where they form the basis for most food chains. They first appeared on earth over one billion years ago, making them one of the oldest species of life. Microalgae are usually made from one single cell or a small number of cells put together in a very simple structure which can quickly grow and multiply into a large biomass rich in nutrients. Microalgae come in different shapes and colours and can be used for different industrial purposes from food and feed to cosmetics and biofuel production. Some of the more well-known microalgae species include Spirulina and Chlorella which are used in food supplements.

Microalgae have great potential to be used as ingredients in innovative and sustainable food and animal feed products. Microalgae are beneficial as a food source because in addition to having a high protein content, they also contain valuable nutrients such as phenolic compounds, vitamins and minerals.

Using microalgae as food is still quite uncommon for many people in Europe, and if they are to live up to their potential, it’s interesting to find out how new microalgae products are welcomed by consumers. It is a complex challenge to try to produce new food products with improved nutritional properties without affecting sensory qualities such as taste and texture that may stop people from enjoying them. Some examples of microalgae-enriched foods that are currently being developed include:

These food products are being developed and tested as part of the EU-funded project ProFuture. Read more about how researchers are developing these fortified breads and snacks.

Consumer perceptions of microalgae in food

There are several different factors influence how people perceive microalgae in food, including: 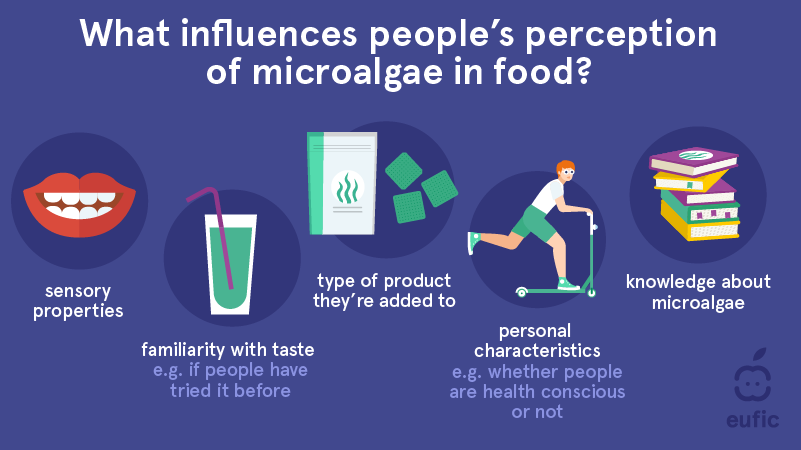 The work described in this article is part of a project called ProFuture, a European-funded Horizon 2020 research project aiming to scale up microalgae production and prepare the market uptake of microalgae proteins as ingredients for innovative and sustainable food and feed products.

The ProFuture project does not only involve the work around consumer perceptions of microalgae in food, it actually involves the whole microalgae value chain. This means that the work does not end with the new products, as other ProFuture partners work on areas like increasing the cost-efficiency and sustainability of large-scale cultivation of microalgae, regulatory aspects (as in some cases microalgae are considered a novel food and must be legally accepted), the environmental impact (LCA), and preparing for a successful market uptake of these new products. All of these aspects are important when introducing microalgae as a sustainable part of our diet. 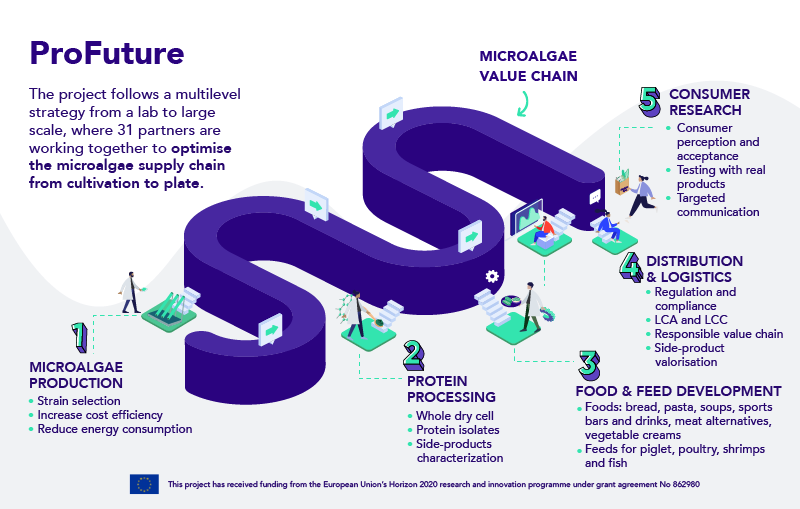