Contaminants in vegetable oils and fats (and foods containing them such as cookies, pastries and others) pose a potential health concern to average consumers for young age groups (infants, toddlers and children under 10 years old). There is also a potential health concern for adolescents, adults and older age groups with high levels of exposure through their diet (i.e those eating larger quantities of foods containing glycidyl esters than the average population). This is the European Food Safety Authority (EFSA) scientific opinion on the risks for human health related to the presence of 3- and 2-MCPD and their esters and glycidyl esters in food, presented in a report released on 3rd May 2016.

Potential health concerns due to exposure to glycidol

Based on data from animal studies the EFSA Panel on Contaminants in the Food Chain (CONTAM) found sufficient scientific evidence to conclude that glycidol (which is released from glycidyl esters after consumption) is genotoxic (i.e. it can damage DNA) and carcinogenic. Studies in rats also indicate evidence that glycidol can cause toxic effects on the brain and kidneys and affect fertility.

Glycidyl fatty acid esters (GE) are formed from the diglycerides or monoglycerides naturally present in all vegetable oils when heated to temperatures > 200ºC e.g. during the deodorisation stages of refining. They are consequently also found in foods that contain refined oils and fats. This includes vegetable fats and oils, cookies, pastries and cakes, infant and follow on formula, margarine, fried or roasted meat and some chocolate (or similar) spreads. When consumed by humans through the diet, GE are converted into free glycidol.

Based on their findings, the CONTAM Panel did not set a safe intake level for glycidyl esters (GE) but rather used the Margin of Exposure (MoE) approach to assess the potential risk of exposure of different age groups to glycidol1. This approach compares the margin between the level of glycidol that causes cancer in animal studies and the estimated human exposure levels. The magnitude of the MoE indicates the level of health concern for consumers exposed to the substance (i.e. high concern, low concern or unlikely to be of concern); the higher the MoE, the lower the level of concern and vice versa. For glycidol, EFSA considered a MoE of 25,000 or higher to be of low health concern for humans.

The MoE for glycidol for each age group can be seen in Table 1. Based on these values, the Panel concluded current levels of exposure to GE are a potential health concern for all younger age groups (infants, toddlers and children under 10 years old), but in particular for non-breastfed babies fed exclusively with infant formula. There is also a potential health concern for adolescents, adults and older age groups with high levels of exposure through their diet.

2- and 3-MCPD and their esters are found in palm fats and palm oils but also in other vegetable oils, margarines and some processed foods (e.g. pastries and cakes). The MCPD esters are formed during the processing required to make oils and fats suitable for use in food manufacturing i.e. refining involving high temperatures.

Based on the available evidence from animal studies that show kidney toxicity, the CONTAM Panel has lowered the tolerable daily intake (TDI) of 3-MCPD and its fatty acid esters to 0.8 μg per kg of body weight (bw) per day. A TDI is an estimated amount that can be consumed daily over a lifetime without being harmful to health - it includes a very large margin of safety. Currently, the average exposure levels of adolescents, adults and older age groups to 3-MCPD and its esters are below the TDI and therefore there is no health concern for these population groups. However, half of the dietary surveys examined by EFSA show that the average levels of exposure of infants, toddler and older children (<10 years old) are at or above the established TDI, which raises a potential health concern.

Due to insufficient scientific data, no safe daily intake level could be calculated for 2-MCPD. In order to set evidence-based safe levels, further studies need to be carried out to form conclusions on whether there is a potential health concern related to the presence of 2-MCPD in food.

EFSA evaluated 7,175 data on the levels of 3-MCPD, 2-MCPD and glycidol in food products in Europe. More than half the data were related to levels of the contaminants in fats and oils; but other food groups where the presence of these substances is expected were also represented in the data set (e.g. soy sauce, hydrolysed vegetable protein, cookies, potato crisps, pastries, fried or roast meat). Data from dietary surveys representing 78,990 participants from 23 European countries show that the youngest population groups (infants, toddlers and older children younger than 10 years old) present the highest dietary exposure to process contaminants. The food groups “infant and follow-on formulae”, “Vegetable fats and oils” and “cookies” are the major source of those substances to infants. Toddlers are mainly exposed to MCPDs and glycidol from “vegetable fats and oils, “cookies” and “pastries and cakes”. For the older children (3 to 10 years old), the highest source of exposure is from “pastries and cakes”, “margarine and similar” and “cookies”. Adolescents, adults, and elderly groups show to have a major source with intake of “margarine and similar” and “pastries and cakes”. 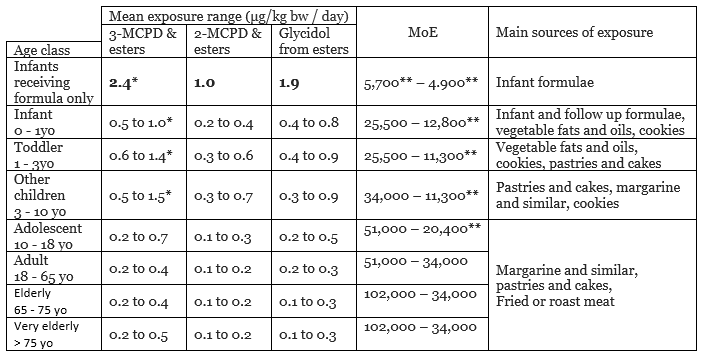 European Food Safety Authority. (2016). EFSA Scientific opinion on risks for human health related to the presence of 3- and 2-monochloropropanediol (MCPD), and their fatty acid esters, and glycidyl fatty acid esters in food.