A nutritious and balanced diet is an important part of a healthy pregnancy. However, certain foods and drinks can increase the risk of harm to your unborn baby. Knowing which foods to avoid and choosing safe alternatives will ensure both your own and your baby’s health. However, if you have accidentally eaten something potentially risky, there is still a low chance that it will cause harm. If you are worried about your intake or develop symptoms of food poisoning, always contact your doctor who can further advise you.

During pregnancy it is important to avoid some foods that could cause harm to the unborn baby. Some components of food or supplements, as well as infectious agents like bacteria and their toxins, viruses or parasites, may cause foodborne illness, also known as food poisoning.

Food poisoning is usually mild and will only show mild flu-like and gastrointestinal symptoms such as fever, vomiting or diarrhoea. However, as the immune system changes during pregnancy, pregnant people are at greater risk of getting ill from certain infectious agents such as listeria in foods than the general population.1,2 Furthermore, some illness-causing microbes can be harmful to a fetus.1 The overall risks of getting foodborne illnesses are low, and by carefully choosing and preparing your food you can lower your risk even further.

The following foods are best avoided or limited during pregnancy.

Pasteurisation is a process where heat is applied to kill potentially harmful bacteria. During pregnancy, it is therefore advised to stay away from unpasteurised milk and cream, as well as all mould-ripened soft cheeses with a white rind made from unpasteurised (raw) milk, including brie, camembert, chèvre (a type of goats’ cheese), roquefort, gorgonzola and Danish blue cheeses. These cheeses may contain Listeria, a bacteria that can cause an illness called listeriosis.3 Unpasteurised cheeses are safe when they are cooked thoroughly, for example on a pizza or quiche.

Other cheeses are still safe to eat! You can eat all soft cheeses made from pasteurised milk, such as quark, feta, cottage cheese, cream cheese, mozzarella and cheese spreads.4

All hard cheeses are safe to eat, even when they are made from unpasteurised milk.3 These cheeses, such as parmesan and gruyere, contain less water which makes it less likely for bacteria to survive and grow.

Figure 1. Types of cheese than can be safely eaten during pregnancy or that should be avoided/cooked before eating.

Undercooked or raw meats, including raw cured meats like salami, chorizo and Parma ham can contain harmful parasites like Toxoplasma gondii or bacteria like Salmonella or Listeria.4 You can prevent yourself from becoming ill by always making sure to cook your meat completely, until the centre reaches at least 72°C, with no traces of blood. Avoid cross-contamination of foods by thoroughly washing hands, knives and cutting boards after preparing raw meats in your kitchen and always using different utensils for raw and cooked foods. Read more tips on safe food handling here.

Raw eggs can carry the Salmonella bacteria which can cause foodborne illness.4 Salmonella cannot survive at high temperatures. Cook your eggs thoroughly, to make them safe to eat. Avoid foods that contain raw eggs such as homemade mayonnaises and some desserts. You can still eat mayonnaises, dressings and ice cream sold in supermarkets as they are made with pasteurized eggs and thus safe to eat.

Raw or undercooked seafood and fish high in mercury

You can also still enjoy eating seafood as long as it is well cooked through, to avoid food poisoning. Foods with raw fish and shellfish, such as sushi, sashimi and taramasalata, as well as shelled crustaceans such as shrimps and crabs that sold pre-cooked and require cold storage, should be avoided.5

Eating fish is encouraged during pregnancy because it is a great source of healthy fatty acids. However, some varieties of fish that are high in mercury should be avoided because too much mercury can cause harm. This includes most predatory fishes such as shark, swordfish, marlin and king mackerel.4,6

Eating two portions of low-mercury fish a week poses no increased risk to the unborn baby. You can limit your intake of mercury by opting for fish with low levels of mercury such as salmon, cod, haddock, plaice, shrimp, anchovies, herring or prawns. Also limit your intake of tuna to one serving of fresh or 4 servings of canned tuna per week.6 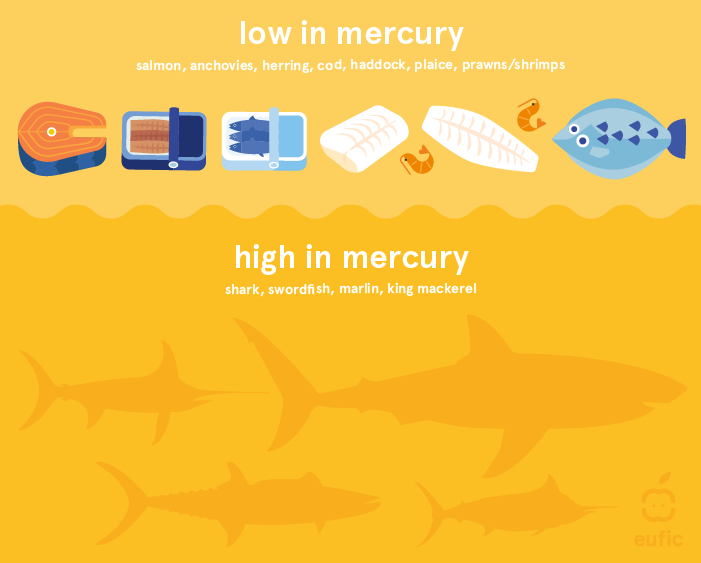 Figure 2. Types of fish and seafood that are low or high in mercury. Fish containing high levels of mercury should be avoided during pregnancy.

Eating raw sprouts can be risky during pregnancy. Raw sprouts, for example bean, alfalfa, and radish sprouts, as well as ready-to eat salads can contain harmful bacteria such as Listeria, Salmonella and E. coli.7,8  Washing sprouts is not enough to make sure they are safe to eat raw. To kill the harmful bacteria, they must be cooked thoroughly.

You can still eat bagged and pre-washed lettuce and vegetables, as long as you store them in the fridge and give them another wash before consuming them.4

In general, vegetables and fruits are safe to eat and are an important part of a healthy diet during pregnancy. However, remember to always wash them thoroughly before eating or preparing them to remove any trace of soil. There is a small chance that unwashed fruits and vegetables could be contaminated with harmful bacteria or parasites like Toxoplasma gondii.1

Liver (products) and vitamin A supplements

Avoid eating all liver (products), as liver is high in vitamin A. Some studies have linked large amounts of vitamin A to birth defects and liver damage.4 It is therefore also not recommended to take any dietary supplement that contains a high dosage of vitamin A during pregnancy.

Pâté should also be avoided, as it can contain the bacteria Listeria and hepatitis E virus.2,5

Drinking alcohol is not safe at any stage during pregnancy and there is no safe level of alcohol consumption during pregnancy. Alcohol can pass through the placenta and the baby will be exposed to the alcohol in the blood. As the baby’s liver is not yet fully developed, the alcohol will not be broken down quickly and in turn can affect the baby’s development.10

The more you drink during pregnancy, the greater the risks. Drinking during pregnancy can cause fetal alcohol syndrome (FAS), a serious condition where the baby has severe life-long mental and physical problems.

During pregnancy, it is recommended to limit caffeine intake to 200 mg a day from all sources.12 A cup of filter coffee (200 ml) contains around 90 mg of caffeine. Caffeine can also naturally be found in tea, chocolate and some soft- and energy drinks. Although the risks are small, high intakes of caffeine (>300 mg per day) during pregnancy have been associated with an increased risk of low birth weight.12 Further, some evidence suggests that high levels of caffeine may be linked to increased risk of miscarriage and stillbirth13 so it is best to stick below the maximum recommended safe limit of 200 mg per day.

If you are a heavy coffee drinker, try to gradually lower your consumption or replace coffee with caffeine free teas. 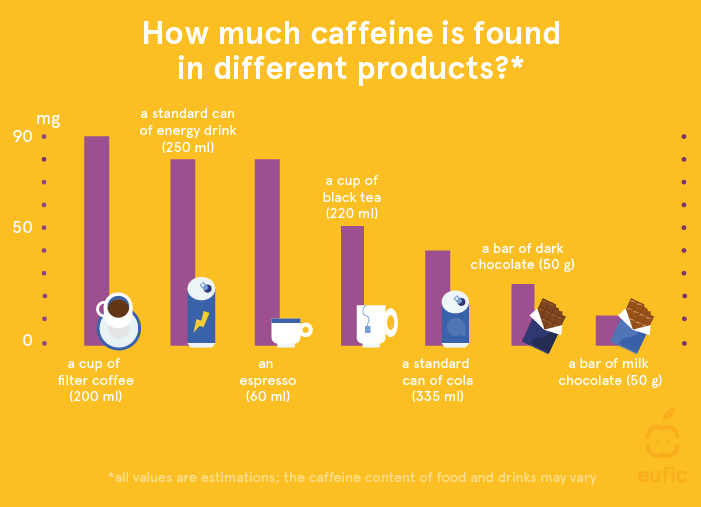 Eating with peace of mind throughout pregnancy

Although there are some foods you have to pay attention to during pregnancy, there are still many foods left to enjoy! Do not worry if you have accidently eaten something potentially risky. The chances that it will cause harm are very small. However, always contact your doctor if you are worried or if you experience symptoms that may indicate food poisoning, such as vomiting, fever or diarrhoea.