How to choose your culinary oil

There is an increasing variety of vegetable oils for cooking and food preparation. How do you decide which one to use? Considerations include taste, functional properties of the oil, cost, and the health impact. Here is some explanation on oils, as well as guidance on choosing them according to purpose.

What is in a vegetable oil? 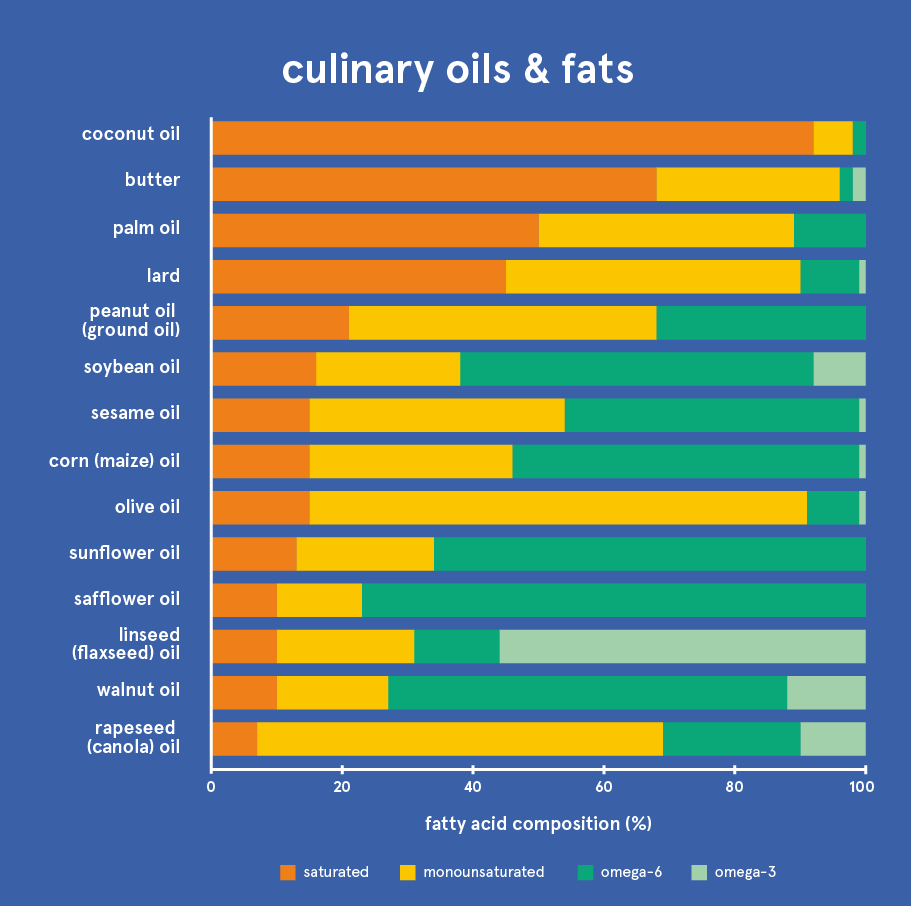 Figure 1. Common fatty acid composition of major culinary oils, and butter and lard for comparison2,3; this may vary between products.

Vegetable oils may contain fat-soluble vitamins including vitamin E and vitamin K. Oils may also contain varying amounts of beneficial bioactive compounds, such as the antioxidant polyphenols in virgin and extra virgin olive oil. In addition, plant oils are a natural source of sterols, which are preferentially absorbed by the human body in place of dietary cholesterol (thereby blocking its absorption).

Vegetable oils of the same type can have different levels of refining. Oils are refined to remove any unwanted taste, smell, colour or impurities. The extent of refining will depend on the desired usage (for example taste, appearance, or oil stability (see ‘cooking with oils’)). Unrefined oils retain beneficial plant bioactives.2 For example, non-refined oils like ‘virgin’ olive oil and ‘extra virgin’ olive oil are likely to contain more antioxidant polyphenols than refined olive oil. Extra virgin oils are used especially where the olive taste is needed. It is used for flavouring rather than as a cooking oil.

During cooking, oils serve as a medium to transfer heat, but they also gets absorbed by the food. During the cooking process, oils also absorb fat soluble flavour compounds, which contribute to the taste of food. Foods that have been fried, or oven baked with oil, have a crisp texture and a golden appearance.

Oils should be treated with care. Fatty acids are sensitive to heat, light and oxygen, and over-exposure to these during storage or cooking can change the chemical structure of the fatty acids. This can produce ‘off’ flavours and lead to the destruction of vitamins and loss of nutritional value.1

Stability of the fatty acids varies between oils.1 Heat stability is indicated by the ‘smoke point’ - the temperature at which decomposition becomes visible as bluish smoke. If the cooking temperature is too high, the oil will eventually degrade. Generally, the longer it is heated, the more it will deteriorate. On the other hand, if the temperature is too low, cooking time is extended and more oil will be absorbed. In general, refined oils have higher stability and smoke point.

It is also important to note that the higher the level of unsaturation of the fatty acids, the lower the heat stability of the oil.1 Refined monounsaturated-rich oils, such as refined, non-virgin olive oil, peanut oil, as well as high oleic rapeseed and sunflower oils, are therefore more stable, and can be re-used to a greater extent than polyunsaturated-rich oils, such as corn oil and regular sunflower.

Repeated use of oil, typical for deep-frying, reduces the temperature at which the smoke point occurs, though this effect is much less marked in stable oils such as high oleic rapeseed and high oleic sunflower oils. If vegetable oils are to be used repeatedly, they should be filtered after frying (when cold), to remove particles. The frying vessel must be carefully cleaned and fully dried. In practice, oils can be used a few times - as long as the sensory characteristics are good. It is generally advised to totally renew the oil after 10 frying cycles.

A recent study indicated that oils and margarines that are rich in essential polyunsaturated fatty acids (PUFAs omega 3 and 6) are also suitable for shallow (pan) frying and baking, with 95% of the PUFAs retained.4 Margarines are emulsions of plant oils and water (up to 16%).5 Solid margarines cannot be used safely for high-temperature frying, since water that they contain causes spattering. However, high fat margarines (i.e. with a fat content above 60%) can be used for shallow frying and sautéing. A relatively new option is bottled liquid margarines, designed for cooking. They have higher amounts of healthy unsaturated fatty acids than solid ones, and have been developed to have good frying properties, such as even-browning and reduced spattering. With liquid margarines, as with solid margarines and butter, a suitable cooking temperature is attained when the large air bubbles disappear and the colour becomes transparent.

Which oil to choose

The choice of oil will depend on cost, taste, and purpose. The table below gives a guide.

* may vary between products. These recommendations also depend on dietary habits, taste, availability of the different oils and the associated costs.

Use a variety of oils. Consume unsaturated oils, instead of saturated fats, as that may reduce the risk of developing cardiovascular disease. Experiment with cold-pressed and unusual oils for optimum taste in dressings and sautéing, and choose heat-stable oils for deep frying and refined oils for baking. To prevent rancidity and off-flavours, store oils in a dark, cool, dry place and use within the defined shelf life of the oil.2 Remember: all oils are calorie-dense, and should be used sparingly. But don’t forget to enjoy your culinary oils!

Be the first to know about our latest material