What are emulsifiers and what are common examples used in food?

Add oil to water and the two liquids will never mix. At least not until an emulsifier is added. Emulsifiers are the key to why the oil doesn’t separate from the vinegar in mayonnaise, why chocolate can be moulded and shaped into different chocolate bars, and why bread doesn’t turn stale as easily. This article explores what emulsifiers are and in which food products they play a vital role.

What are emulsifiers and how do they work?

Emulsifiers are food additives used to help mix two substances that typically separate when they are combined (e.g., oil and water).1,2 Emulsifiers have one water-loving (hydrophilic) and one oil-loving (hydrophobic) end. When they are added to an unmixable liquid, the emulsifier molecules position themselves along the so-called interfacial layer where the oil separates from the water. Here, the emulsifier is positioned in such a way that their hydrophilic end faces towards the water phase and their hydrophobic end faces the oil phase, making it possible for the water and oil to become finely dispersed in each other. In the end, the emulsifier creates a stable, homogenous, and smooth emulsion. 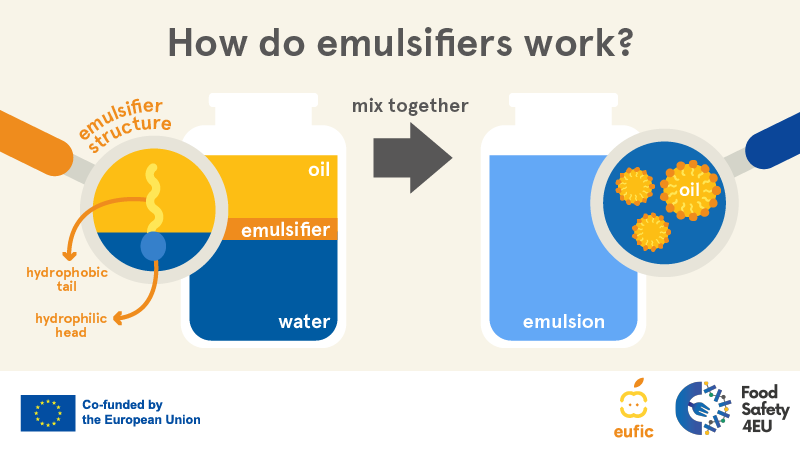 Emulsifiers play an important role in the manufacture of food products, enhancing their appearance, taste, texture, and shelf life.1,2 Nowadays, many of the foods we consume, such as margarine, mayonnaise, creamy sauces, candy, packaged processed foods, confections, and a range of bakery products, will not have the same properties without the addition of an emulsifier.

What are different types of emulsifiers?

Emulsifiers currently used in food production are either purified natural products (either from plant or animal origins) or synthetic chemicals that have very similar structures to the natural products.2 For example, the emulsifier lecithin (E322), which is widely used in chocolate products, can be sourced from soybeans (oil), eggs, liver, peanuts, and wheat germ.3 Pectin (E440), also a widely used emulsifier, can also be naturally found in fruits such as apples and pears.4

Currently, around 60 additives in the category ‘emulsifiers, stabilisers, gelling agents, and thickeners’ are permitted in the EU.5-18

What are common applications of emulsifiers in food?

It is possible to make bread without emulsifiers but the result is often dry, low in volume and easily stales.2 As little as 0.5% emulsifier added to the dough is enough to achieve an enhanced volume, a softer crumb structure and a longer shelf-life. There are two types of emulsifiers used in bread: dough strengtheners (e.g., diacetyl tartaric acid esters (E472e) and sodium or calcium stearoyl-2-lactylate (E481, E482)) and dough softeners (e.g., mono- and di-glycerides of fatty acids (E471)). Dough-strengthening agents make the dough stronger and result in bread with an improved texture and volume. Dough-softening agents allow obtaining a softer crumb structure and increased shelf-life.

All chocolate products contain 0.5% of lecithin (E322) or ammonium phosphatide (E442). These emulsifiers are added to provide the right consistency of the chocolate.1 As a result, the chocolate can be moulded into plates of chocolate, chocolate bars etc. If the chocolate has been stored at too high temperatures, its surface may appear dull or white. This is called ‘bloom’ which makes the product less attractive to the customer. Sorbitan tristearate (E492) can delay the development of bloom.1

Ice-cream is one of the most complex foods we encounter, containing ice crystals, air, fat particles, and an unfrozen aqueous mix.2 Emulsifiers are added during the freezing process, to promote a smoother texture and ensure the ice-cream does not melt rapidly after serving. They also improve freeze-thaw stability. Mono and diglycerides of fatty acids (E471), lecithin (E322) and polysorbates (E432, E436) are commonly used in ice-cream production. All this applies to other desserts such as sorbet, milkshake, frozen mousse and frozen yogurt as well.

Emulsifiers give margarine the required stability, texture and taste.2 To ensure that the water droplets are finely dispersed in the oil phase, mono and diglycerides of fatty acids (E471) and lecithin (E322) are widely used. Citric acid esters of mono and diglycerides:

Sausages dominate Europe’s processed meat industry. The main components of sausages are meat proteins, fat and water, which are bound together in a stable emulsion.2 Emulsifiers stabilise this emulsion and distribute the fat finely throughout the product. And in low-fat meat products, food additives are responsible for making them as pleasant as their full-fat counterparts. The food industry uses mono and diglycerides of fatty acids (E471) and citric acid esters (E472c) for manufacturing processed meat.

Just like any other food additive, emulsifiers are subject to stringent EU legislation governing their safety assessment, authorisation, use and labelling.18 These legislations require all added emulsifiers, as all food additives, to be specified on the labels of products where they are used, either by their name or their corresponding E-number. Additionally, they must be preceded by the technological function (e.g., emulsifier: E466 or emulsifier: carboxymethylcellulose).

Emulsifiers are food additive molecules that act as a stabilizer for emulsions, preventing liquids that normally don’t mix from separating. Emulsifiers are abundant in the food supply, playing an important role in enhancing the appearance, texture, and shelf-life of many of the foods we consume today.

This article was produced in collaboration with FoodSafety4EU as part of a joint food additive campaign. FoodSafety4EU has received funding from the European Union’s Horizon 2020 Research and Innovation programme under Grant Agreement No. 101000613.