Food and beverage companies are reformulating foods, i.e. changing the composition of processed foods, including the reduction of sugars. However food reformulation is no simple task. Apart from sweetness, sugar has important technological functions like providing volume, mouth feel, viscosity, and preservation that must be taken into account when replacing it in foods and drinks.

Sweeteners are much sweeter than sugar (tens to hundreds of times), so only a small amount is needed to achieve a sweet taste. Commonly used sweeteners include acesulfame K, aspartame, cyclamate, neotame, saccharin, sucralose, and steviol glycosides (extracted from Stevia). Most provide no energy at all (see Table), and none of them tastes exactly like sucrose. They are used in sugar-free and low-calorie soft drinks, desserts, dairy products, confectionery, chewing gums, chocolate drinks, and as table-top sweeteners.

Bulking agents are used to replace the volume of sugar in foods.

Some bulk sweeteners, like polyols (sugar alcohols such as sorbitol, maltitol, xylitol, erythritol, isomalt, mannitol) provide sweetness and add texture in confectionery products, baked goods and ice creams, or act as humectants (retain humidity) in confectionery, biscuits and pastry. Polyols contain less energy (2.4 kcal/g and, for erythritol 0 kcal/g) than sugar (4 kcal/g), and vary in sweetness from slightly less than sugar (sorbitol, erythritol, lactitol) to equal to sugar (xylitol, maltitol). Some polyols, especially xylitol, absorb heat when dissolved in the mouth, lowering the temperature and leading to a “cooling effect” - a property favourable in chewing gums.

Other bulking agents provide volume, but not a sweet taste, like inulin and polydextrose. Inulin (2 kcal/g) is a soluble dietary fibre extracted from chicory, used in dairy products, baked goods, cereals, dressings and chocolate. Polydextrose, a low caloric (2 kcal/g) glucose polymer, acts as a soluble fibre, and is used in cakes, candies, desserts, and salad dressings. Polydextrose is also used as humectant, stabiliser and thickening agent.

When replacing sugar, the same texture (mouth feel) and viscosity must be preserved. The latter is often achieved by some of the bulking agents mentioned above. Erythritol can be used as sugar alternative where crystallisation is desired, such as in some cookies, sugar-coated cereals and fudge. Also, food additives such as polysaccharides (starch, pectin) or gums (guar, xanthan), are used in small amounts to increase the viscosity or thickness of foods such as salad dressings, ice creams, pastries, jams, pasta (starch) etc. These substances do not provide sweetness, and their caloric content may be equal to (e.g. starch), or less than sucrose (~2 kcal/g for pectin, gums). Finally, sugar also acts as a preservative, e.g. in jams, by inhibiting spoilage. Reducing or removing sugar means that the product with reduced-sugar may not last as long, or that different processing techniques have to be used in its manufacture, including addition of preservative agents.

Research studies found that the replacement of sugar by low-calorie sweeteners could lead to reduced energy intake and better weight management. However, more studies are needed, especially of the long-term effects.1-4 We should not forget that obesity is a complex phenomenon that requires a thorough and sustainable makeover of one’s lifestyle. The use of low-calorie sweeteners is just one facet of it.

Certain sugar replacers may have other health benefits. A few health claims have been approved by the European Commission. For example, products containing low-calorie sweeteners and polyols such as xylitol, sorbitol, mannitol, maltitol, lactitol, isomalt, erythritol, D-tagatose, isomaltulose (palatinose), sucralose or polydextrose instead of sugar can claim they result in lower blood sugar levels after eating, or help maintenance of tooth mineralisation; chewing gums sweetened only with xylitol reduce dental plaque, a risk factor for dental caries.5

With the exception of table top sweeteners, EU legislation specifically limits the use of sweeteners as sugar replacers in foods and drinks that thus become energy reduced (30% lower in energy than original or similar products), free from added sugars, non-cariogenic (do not promote tooth decay) or have a longer shelf-life. Likewise, such addition is permitted in the manufacture of foods for special dietary uses (dietetic foods).6 In some people, overconsumption of food and drinks containing polyols may bring about laxative effects and gastrointestinal symptoms. Foods containing more than 10% added polyols must be labelled with the wording ‘excessive consumption may produce laxative effects’.7 Similarly, foods containing aspartame must state it on the label (‘contains aspartame (a source of phenylalanine)’ or ‘contains a source of phenylalanine’), since aspartame is made up from aspartic acid and phenylalanine; the latter should be avoided by people with a rare genetic disorder known as phenylketonuria (PKU).

Replacing or reducing sugar is a complex task. In soft drinks, sugar is replaced by low-calorie sweeteners that give sweetness but not bulk, which, without further viscosity-promoting ingredients, result in a different mouthfeel (texture) between “diet” (sugar-reduced, or sugar-free) and “regular” (full sugar) drinks.8 Some sweeteners may leave a bitter aftertaste that is perceived by some consumers.9 A combination or blend of different sweeteners can provide a better taste profile than the use of a single sweetener. In confectionery and baking, sugar provides many functions; hence to replace it, polyols are usually combined with gums, fibres or low-calorie sweeteners, as in chewing gums, jellies and chocolate. Although an ingredient can work well to replace sugar in one product, it is not necessarily appropriate for another. In addition, not all reformulated (sugar reduced) products produced with sugar replacers have fewer calories than the standard full sugar products. Some low-calorie sweeteners, like aspartame, are not stable at high temperatures and as such not viable replacements in foods prepared by heating.8 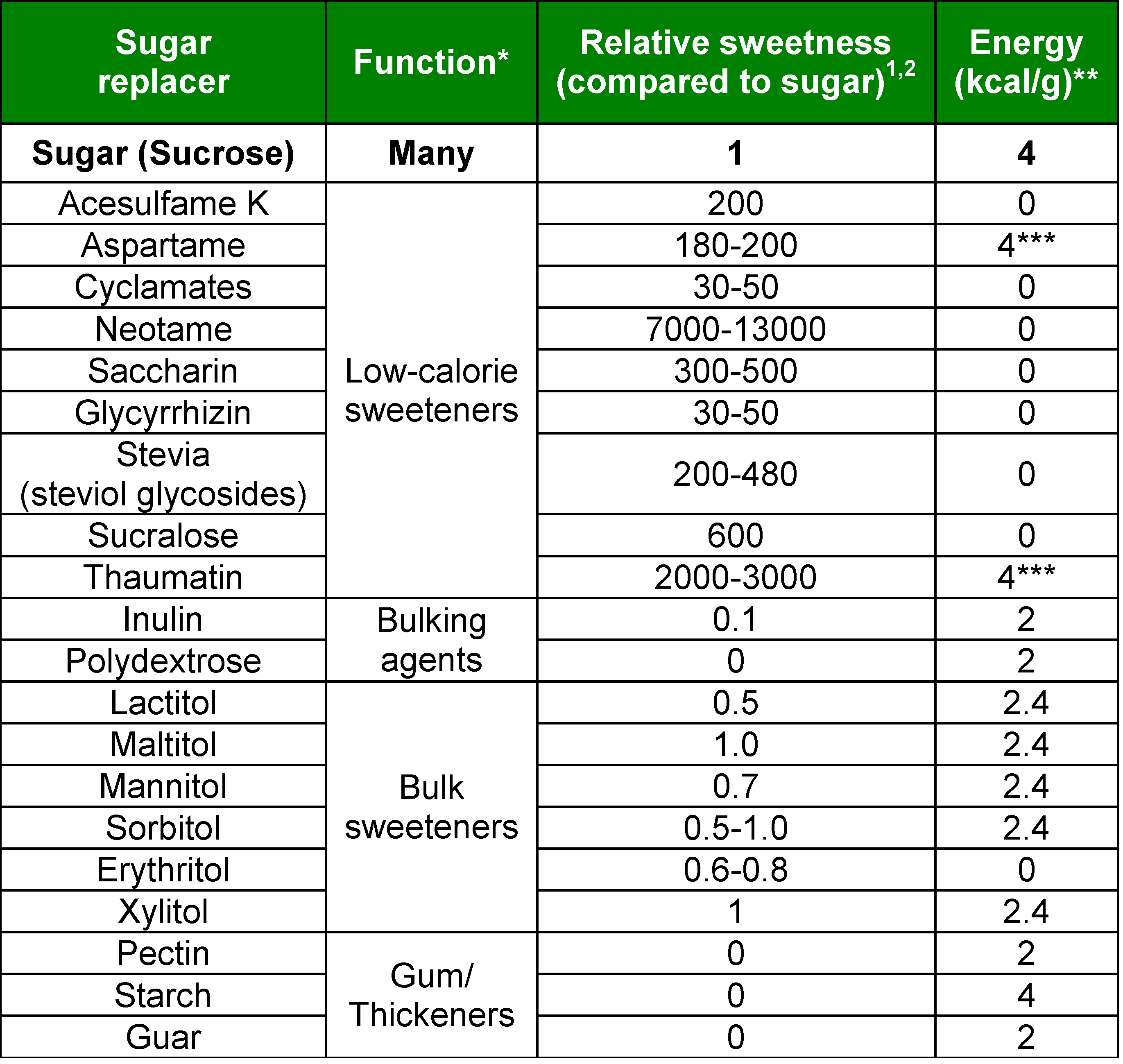 * Some of these sugar replacers, e.g. the bulk sweeteners, may have multiple functions such like sweet taste, texture and volume
** values reported here are those from the European Union legislation (Council Directive 90/496/EEC and Commission Directive 2008/100/EC) that considers all polyols at 2.4 kcal/g except erythritol 0 kcal/g; dietary fibres including carbohydrate polymers such as inulin at 2 kcal/g. Other sources (scientific articles, other institutions outside the EU) present different values (e.g. inulin at 1.5 kcal/g).
*** although these sweeteners have a caloric content equal to sucrose, they are much sweeter and therefore only small amounts of it are used, rendering them practically non caloric.