Whole grain refers to an entire cereal grain also knows as a kernel. The kernel consists of three elements:1

To be defined as ‘whole grain’, a food product must retain the same relative proportions of its components (bran, germ and endosperm) as they exist in the intact grain.2 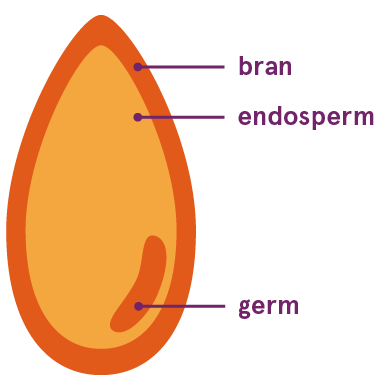 2. What is the difference between whole grains, refined grains, enriched grains and multigrain?

3. What nutrients are present in whole grain?

Whole grain is a rich source of bioactive nutrients including both soluble (for example β-Glucan) and insoluble (for example lignin) dietary fibre, B vitamins, trace minerals and phytochemicals.1 The most beneficial part of grains is in the outer bran, followed by the germ of the seed. Endosperm is a starchy part of a grain, containing also proteins, β-Glucans, carotenoids, selenium, vitamins B and E and flavonoids.1 Whole grain foods can contain up to 75% more nutrients than refined cereals.3

4. Why is eating whole grain important?

There is growing evidence derived from epidemiological studies that eating whole grain products regularly as part of a healthy diet and lifestyle may help to reduce the risk of many common diseases. In 2013, a large study was carried out, that combined different scientific studies on whole grain consumption and its effects on chronic diseases. It concluded that people who eat whole grain regularly - 3 to 5 servings per day (1 serving is 16 g) - compared with people who do not or rarely eat whole grain products, have a reduced risk for developing type 2 diabetes (26% lower risk), cardiovascular disease (21% lower risk), and reduced weight gain over a period of 8-13 years.4 Similarly, 21% reduction in developing cardiovascular diseases was observed when 2.5 servings of whole grains per day was consumed.5 Also, the risk of developing some forms of cancer of the digestive system, such as colorectal cancer, may be reduced by 20% for each 3 servings of whole grain a day.6

Whole grains seem to be beneficial in maintaining a healthy body weight over time as part of a healthy diet and lifestyle. Whole grains are usually low in fat, but rich in fibre and starchy carbohydrate. Some have also a low glycaemic index (GI), which means they provide a slow release of carbohydrate into the blood. This, together with fibre content, may help to keep you feeling fuller for longer - helping to control appetite.7

5. What is a daily recommended whole grain intake?

6. How to select the whole grain product?

In order to know whether a product contains whole grain, one should check the ingredients list on product labels for the words ‘whole’ or ‘wholegrain’ before the name of the cereal, for example ‘whole wheat pasta’ or ‘whole oats’. If whole grains are the first or second ingredient, after water, the food could generally be considered whole grain.

Foods labelled with the words ‘multi-grain’, ‘stone-ground’, ‘100% wheat’, ‘cracked wheat’, ‘seven-grain’, or ‘bran’ are usually not 100% whole grain products, and may not even contain any whole grains. What is more, colour is not an indication of a whole grain. Bread can be brown because of molasses or other colouring ingredients.1

7. How to increase the everyday consumption of whole grain?

When choosing foods from the starchy food group, replace refined cereal foods, such as white bread, rice and pasta, with whole grain varieties such as whole-meal bread, brown rice and wholewheat pasta. Wheat, oats, barley, rye and rice are the most commonly available cereals which can be eaten in the whole grain form. It is important to replace the refined grain product for the whole one, rather than just adding the whole grain product to your existing diet.3