Iodine: foods, functions, how much do you need & more

What do a seaweed salad and mackerel fillet have in common? Iodine, a tiny mineral with a big role to play in our thyroid.

Iodine is one of the trace elements, which our bodies need in very small amounts to keep healthy. Most of the world’s iodine is found in the oceans, which is why marine species of fish and plants, such as a seafood and algae, are usually rich sources of this mineral.

What are the functions of iodine?

Most of our bodies’ iodine is stored in our thyroid gland, which sits on the front of our necks and releases a group of hormones called thyroid hormones. In fact, iodine is key in the production of our thyroid hormones, which in turn affect our overall metabolism. For example, thyroid hormones help our bodies produce energy and help regulate our bodies’ temperature. They’re particularly important during pregnancy and childhood, as they ensure our normal growth and development, including that of our brain and nervous system. 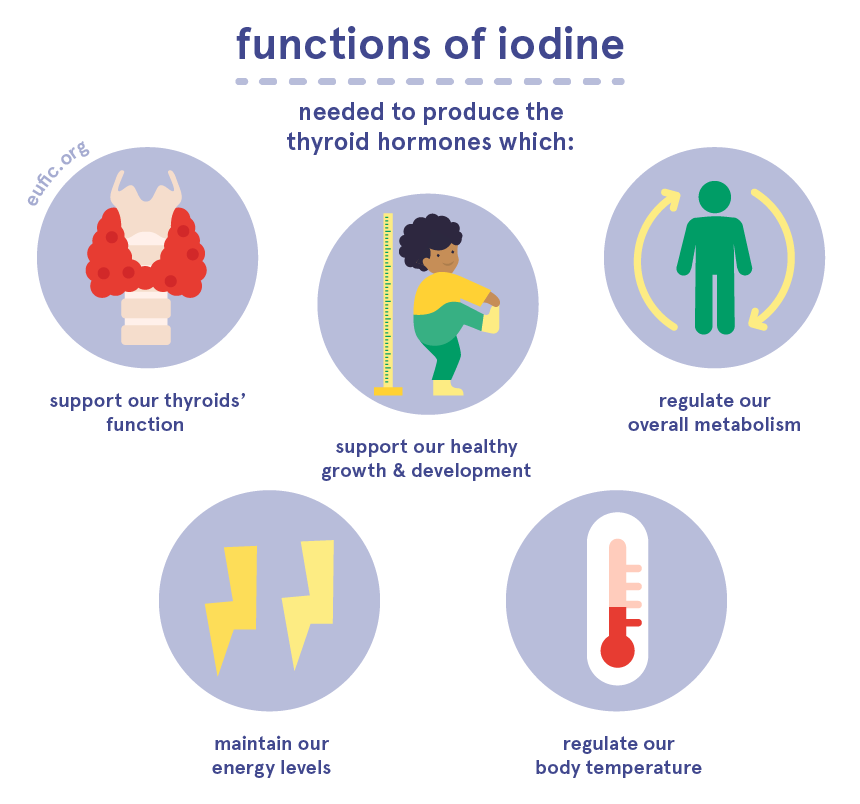 How much iodine do I need per day?

How much iodine you need per day changes according to your age, sex and life-stage.

The DRV* set for healthy adults (over the age of 18) is 150 μg of iodine per day. During pregnancy and lactation, needs can go up to 200 μg per day. Following your country's dietary guidelines on a healthy and balanced diet will help you meet your needs for iodine. 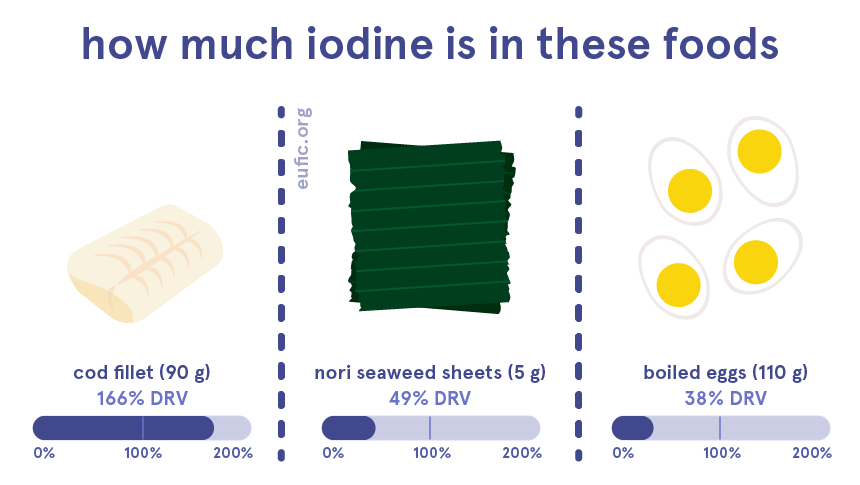 * These values are based on the adequate intake (AI) estimates from the European Food Safety Authority (EFSA). They should not be interpreted as nutrient goals. To know more about dietary reference values (DRV) in Europe click here.

Iodine can be found in some foods, as well as in drinking water, though in varying amounts.

Some of the richest sources of iodine are seafood, such as fish, shellfish, molluscs and seaweed. We can also get iodine from eggs, milk and dairy, though the amounts depend on the iodine content of the animal’s diet.

Many countries add iodine to salt (iodised salt), which helps to increase the intake of this mineral. While iodised salt can be a good alternative to regular salt, we should be mindful about our salt intake in general and prioritise other sources of iodine in the diet. 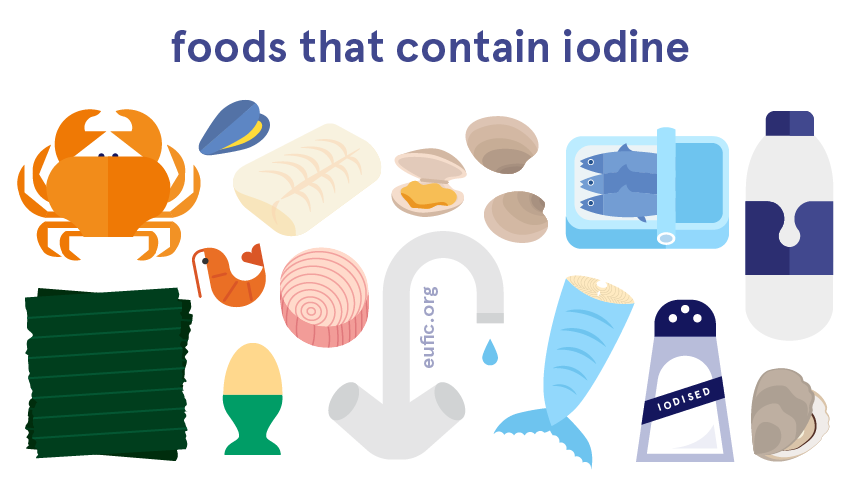 Does iodine interact with other nutrients?

Low levels of vitamin A, selenium, zinc, copper or iron, can impair the functions of iodine in our bodies. However, this is mainly significant when we also have deficient levels of iodine at the same time.

What happens if I have too little iodine?

Diets low in iodine lead to iodine deficiency, which impairs the normal functioning of our thyroid. This usually results in hypothiroidism, a health condition in which our bodies cannot produce enough thyroid hormones. The health consequences of hypothyroidism vary widely between individuals, but commonly include weight gain, excessive tiredness, intolerance to cold and the swelling of our face and other body parts.

Deficient levels of iodine can also have the opposite effect and force our thyroid to work harder and produce more thyroid hormones. This overstimulation of the thyroid gland hyperthyroidism can make it grow, causing a swelling in the neck (goitre). The health consequences of hyperthyroidism vary widely between individuals but can include weight loss, increased appetite, intolerance to heat, insomnia, anxiety, and heart palpitations.

While iodine deficiency can affect our health at any age, it’s particularly concerning during pregnancy and childhood, as it can impair the child’s growth and development, particularly the brain and cognitive development.

What happens if I have too much iodine?

Similar to deficiency, regular high intakes of iodine also affect the normal functioning of our thyroid, increasing the risk of developing hypo- or hyperthyroidism and goitre.

Healthy adults, including during pregnancy and lactation, are advised not to have more than 600 µg of iodine per day, which is about four times the recommended amount. While it’s not common to get toxic amounts of iodine from foods alone, some such as seafood and algae, may exceed the recommended intake in one serving size, thus should be eaten in moderation.

Before taking iodin supplements, check with your doctor or consult a registered dietitian/nutritionist to discuss if there’s any value or risks in adding a supplement to your diet.

When should I pay extra attention to iodine deficiency?

To some people, it might be hard to get enough iodine from their diets, as their needs are increased, or their food sources are limited.

For example, vegans, vegetarians and those who exclude fish and algae from their diets need to pay extra attention to their iodine intake, as this mineral is mainly present in marine fish and algae and to less extent, in eggs and dairy.

While iodine deficiency can affect our health at any age, it’s particularly concerning during pregnancy and childhood (up to the age of 3 years old), as it can impair the child’s growth and development, particularly that of the brain and nervous system. This is particularly important in exclusively breastfeeding vegans and vegetarians since their babies get all their iodine from breastmilk. 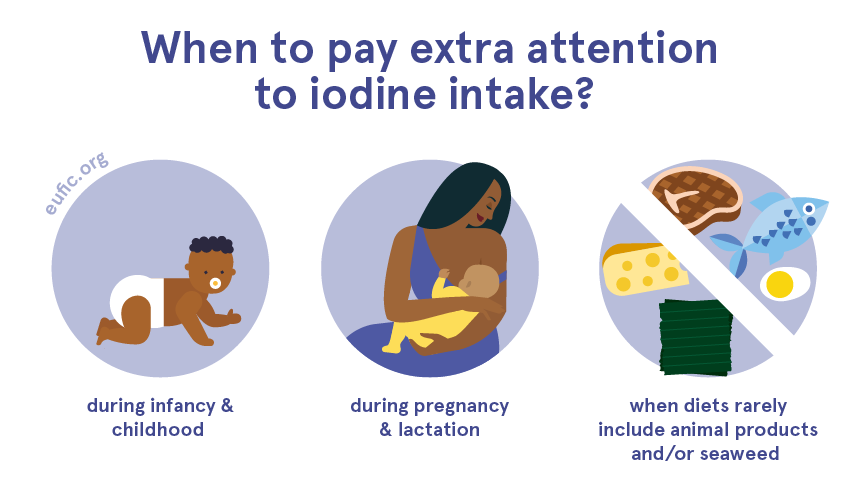