Molybdenum: foods, functions, how much do you need & more

Molybdenum can be quite the tongue twister! Its name comes from the Greek word for lead – molybdos – because when molybdenum was found back in 1781, it was originally confused with lead.

Molybdenum is one of the essential trace elements, which our bodies only need in small amounts to keep healthy. We can find molybdenum in a variety of foods, as well as in drinking water.

What are the functions of molybdenum?

Molybdenum is the missing piece for many enzymes involved in oxidation-reduction (redox) reactions in the body. Redox reactions take place when two molecules exchange - by either giving or receiving - electrons. These reactions are continuously happening in cells and are vital for many basic functions that keep us alive.

For example, molybdenum is needed by specific enzymes that help the breakdown of a particular type of amino acids (those containing sulphur). Without molybdenum, these enzymes wouldn’t function.

How much molybdenum do I need per day?

How much molybdenum you need per day changes according to your age, sex and life-stage.

The dietary reference value (DRV)* for healthy adults (over the age of 18), including during pregnancy and lactation, is 65 µg of molybdenum a day.

We can get enough molybdenum from our diets by eating a variety of foods. Following your country's dietary guidelines on a healthy and balanced diet will help you meet your needs for molybdenum.

* These values are based on the adequate intake (AI) estimates from the European Food Safety Authority (EFSA). They should not be interpreted as nutrient goals.To know more about DRVs in Europe click here.

We can find molybdenum in almost every food, as well as in drinking water, even if in small amounts.

The amount of molybdenum naturally found in plant-based foods varies largely and mainly depends on the type of soil where they were grown.

Some of the foods richest in molybdenum include: 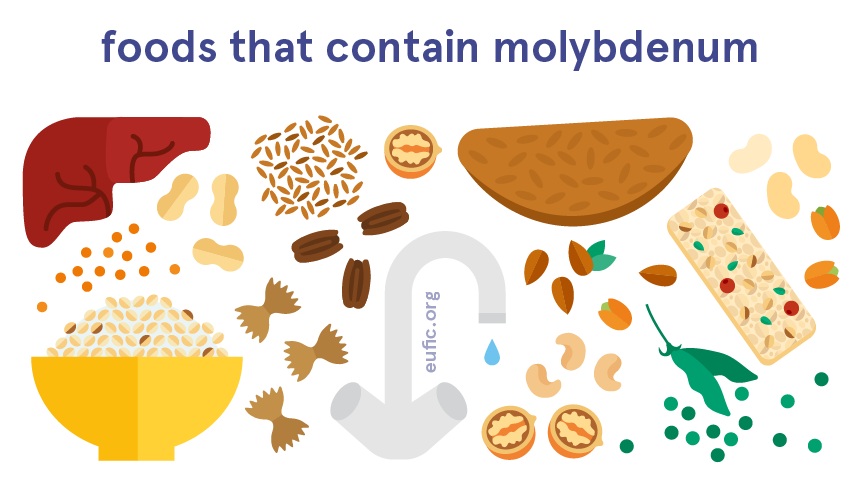 Does molybdenum interact with other nutrients?

No nutrients or compounds seem to impair the absorption or the levels of molybdenum in our bodies, in ways that affect our health.

What happens if I have too little molybdenum?

Molybdenum deficiency is not common since most people can get the recommended amounts of this mineral by eating a varied diet.

However, molybdenum deficiency can still be caused by a rare genetic disorder, called molybdenum cofactor deficiency. This condition prevents the body from using molybdenum, which leads to severe health problems after birth and ultimately to death at an early age.

What happens if I have too much molybdenum?

Molybdenum from foods is not considered harmful since it’s very unlikely that we get too much of it through our diets alone. Plus, our bodies are quite effective at keeping the levels of this mineral within a healthy range by getting rid of any unnecessary surplus through urine.

Nevertheless, adults are advised not to have more than 0.6 mg of molybdenum, which is about 10 times the DRV.

When should I pay extra attention to my molybdenum intake?

Molybdenum deficiency is not a risk for the general population since most people can get the recommended amounts of molybdenum from a varied and balanced diet.