Chloride: foods, functions, how much do you need & more

Although chloride sounds similar to chlorine, the two should not be confused! Chloride is a mineral needed for many bodily functions, whereas chlorine is mainly used to keep swimming pools clean.

Chloride is one of the major minerals, which our bodies need in relatively larger amounts to keep healthy. We can find chloride naturally in a variety of foods, but it’s often common that we have it as sodium chloride, also known as table salt.

What are the functions of chloride?

Chloride is involved in many of our bodily functions. Similar to sodium and potassium, chloride creates specific channels in the membranes of our cells which help to carry different vital tasks.

For example, chloride channels are key in controlling the amount of water and the type of compounds and nutrients that go in and out of cells. Overall, they play an important role in keeping the balance of our bodies’ fluids (thus, helping to regulate our blood pressure) as well as the pH.

Chloride is also important to help the muscles and heart contract and to help our nerve cells carry messages (nerve impulses) between the brain and the body. More so, this mineral is needed to help red blood cells exchange oxygen and carbon dioxide in both the lungs (taking up oxygen and releasing carbon dioxide) and other parts of the body (delivering oxygen and taking up carbon dioxide).

Lastly, chloride also plays a role in the digestion of foods, by supporting the production and release of hydrochloric acid (HCl) in the stomach, without which foods could not be properly digested and absorbed. 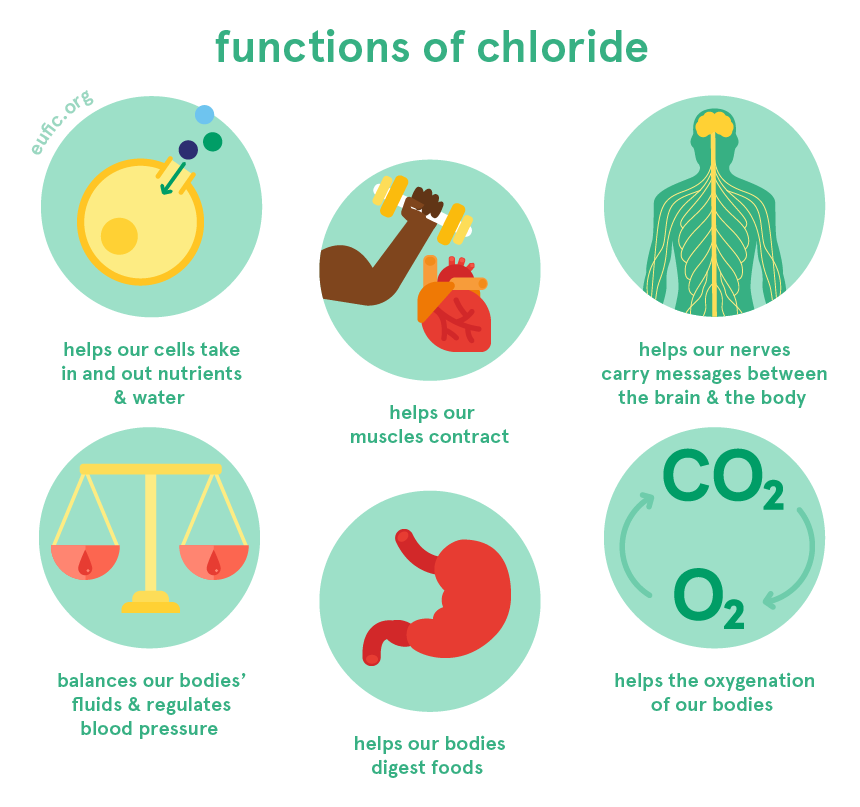 How much chloride do I need per day?

How much chloride you need per day changes according to your age, sex and life-stage.

The dietary reference value (DRV)* for healthy adults (over the age of 18), including during pregnancy and lactation, is about 3 g of chloride per day.

Similar to sodium, the DRV for chloride is considered both safe and adequate, which means it’s enough to meet our bodies’ needs while preventing us from having a higher risk of health consequences linked to diets high in sodium chloride (salt), such as higher blood pressure and cardiovascular diseases.

Following your  country's dietary guidelines on a healthy and balanced diet, particularly in regard to salt intake, will help you meet your needs for chloride without risking exceeding the recommended amounts. 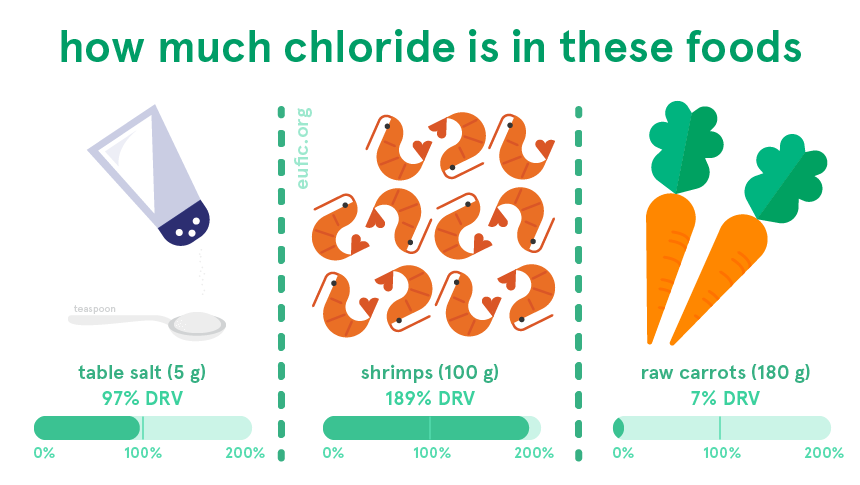 * These values are based on the safe and adequate intake estimates from the European Food Safety Authority (EFSA). They should not be interpreted as nutrient goals. To know more about DRVs in Europe click here.

Yet, it’s the chloride added to foods as table salt or through food additives (during cooking or food processing), that most contribute to our daily intake of this mineral, often in excessive amounts.

Some examples of foods high in chloride are shown in the image below and include:

It’s important to keep in mind that these foods should be eaten in moderation and preferably in versions that have low (< 0.3 g of salt per 100 g of food) or no added salt. Plus, it’s important to pay attention to the amount of table salt that we add to foods when we’re cooking. Remember that a single teaspoon of table salt (5 g) is enough to meet our daily recommended amounts for chloride (and sodium).

Does chloride interact with other nutrients?

Chloride interacts with sodium and potassium to help regulate the volume of water in the body and to support the function of our muscle’ and nerve cells.

Having the right balance of these three minerals in our diets – particularly by making sure we eat enough potassium and keep our salt intake within the recommended values – is key to support a healthy blood pressure.

What happens if I have too little chloride?

It’s not common to have too little chloride in our diets since this mineral is present in most foods.

Chloride deficiency is often a result of specific metabolic disorders or health conditions (such as severe episodes of diarrhoea or kidney malfunction) that cause our bodies to remove excessive amounts of this mineral.

What happens if I have too much chloride?

The maximum recommended daily intake for chloride is 3.1 g, which is roughly equivalent to a teaspoon of table salt. However, it’s important to keep in mind that table salt is often added to many processed foods as well, making it easy for us to exceed the recommended amounts.

Regularly exceeding this recommendation puts us at risk of having high blood pressure, which in turn can lead to other health consequences, such as cardiovascular and/or kidney disease.

When should I pay extra attention to my chloride intake?

Chloride deficiency is not a risk for the general population with a varied and balanced diet.