Iron: foods, functions, how much do you need & more

Iron is one of the most abundant elements in the Earth’s crust and plays a key role in our health.

Iron is one of the trace elements, which our bodies only need in small amounts to keep healthy.

What are the functions of iron? 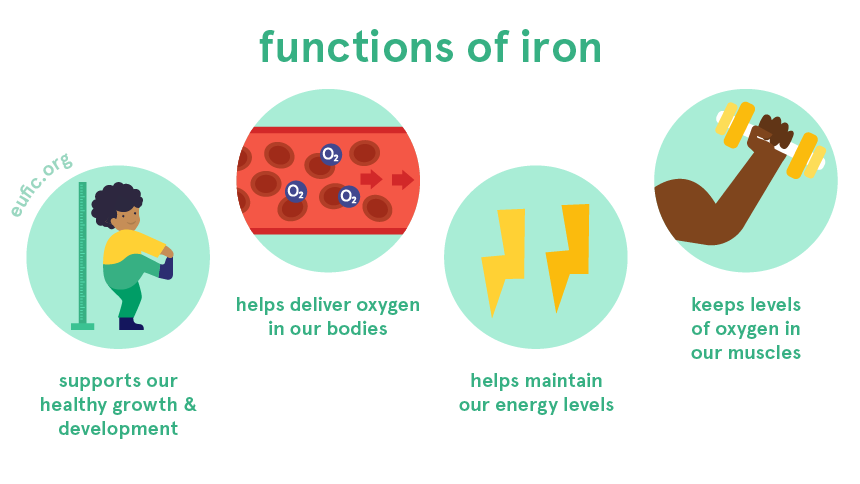 How much do I need per day?

How much iron you need per day changes according to your age, sex and life-stage.

The dietary reference value (DRV)* for healthy adults (over the age of 18) is 11 mg of iron per day. However, from the onset of menstruation to menopause (including during pregnancy and lactation) needs can go up to 16 mg of iron per day.

We can get enough iron from our diets by eating a variety of foods. Following your country's dietary guidelines on a healthy and balanced diet will help you meet your needs for iron.

If you are planning to change your diet, have recently done so, or are concerned that you might not be getting enough iron, we recommend that you consult a qualified nutritionist or dietitian to discuss how to best meet your own nutritional needs. 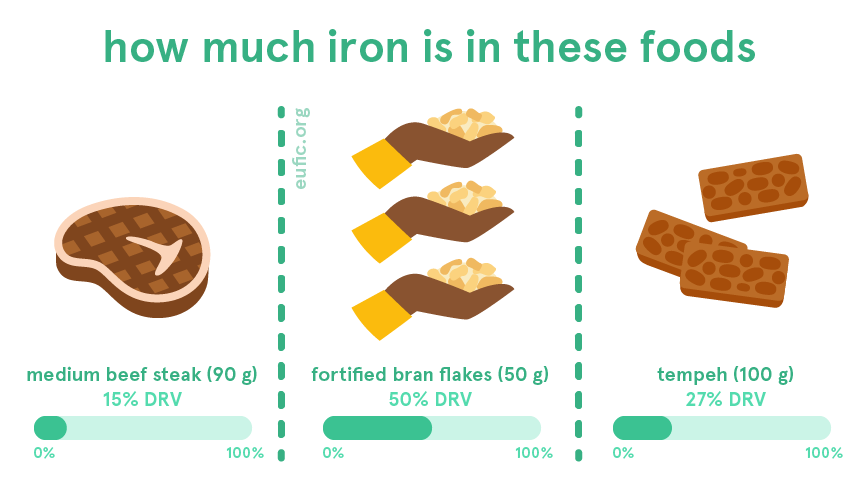 * These values are based on the population reference intake (PRI) estimates from the European Food Safety Authority (EFSA). They should not be interpreted as nutrient goals. To know more about DRVs in Europe click here.

Dairy products and many fruits also provide iron, but the content is usually lower. 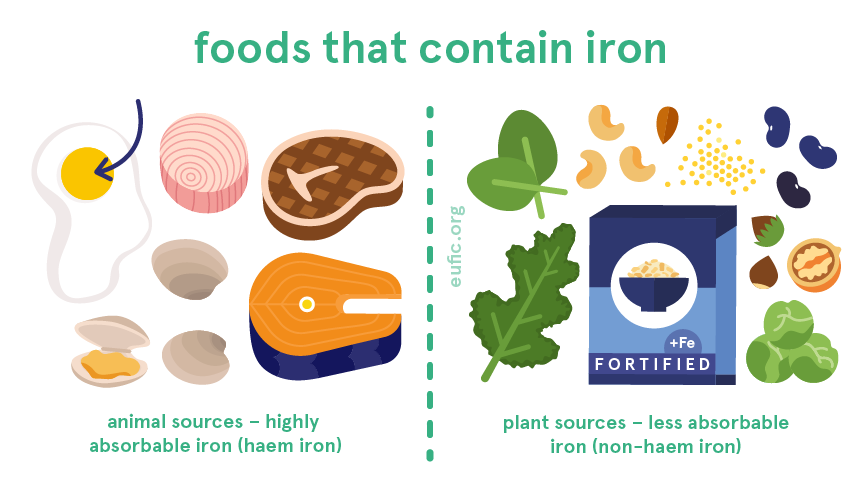 Does iron interact with other nutrients?

Iron absorption can be improved or impaired by other nutrients and compounds in our meals.

For example, some compounds present in plant-based foods and beverages, such as phytic acid (in wholegrain cereals, legume seeds), polyphenols (in tea, coffee, cocoa, red wine and some vegetables and legumes) and soy protein can decrease the absorption of iron from our meals. In turn, this effect can be balanced by the consumption of vitamin C-rich foods (such as pepper, citrus fruits, etc.) which help our bodies absorb more iron from plant-based foods.

Calcium can also reduce the absorption of iron in meals, but not to an extent that it leads to an iron deficiency.

Keep in mind that these combinations won’t necessarily harm or improve your micronutrient intakes in a significant way, as they can be counterbalanced by the overall diet. Remember that having a varied and balanced diet is the best way to get all the micronutrients you need!

What happens if I have too little iron?

When our diets are low in iron, our bodies rely on our iron stores to keep the normal levels of this mineral in our blood and muscles. If our iron stores get too low or run out, our bodies can’t produce enough red blood cells to supply our bodies with oxygen, which leads to a health condition called anaemia. Anaemia often causes fatigue, paleness, lack of focus, hair loss and when it’s not treated fast, it can lead to more serious health consequences.

Iron deficiency can also be caused by specific health conditions that impair the absorption of iron in the gut. However, anaemia caused by iron deficiency is the world’s most common nutritional deficiency disease.

While iron deficiency can affect our health at any age, it’s particularly concerning during pregnancy and childhood, as it can impair the child’s growth and development, particularly their cognitive development. It’s also important that vegetarians and vegans pay attention to their iron intake, as they mainly consume only non-haem iron (from plant-based foods), which is less well taken up by the body.

What happens if I have too much iron?

Iron from foods is not considered harmful and it’s unlikely to cause toxicity, since our bodies get rid of any excess. However, we do need to pay attention to iron in food supplements, since having doses over five times the DRV (50 mg) can cause some gastrointestinal effects in adults.

Overall, toxic levels of iron in our bodies usually result from pre-existing health conditions or genetic disorders that cause our bodies to accumulate iron in amounts that damage our organs and system.

Before taking iron supplements, check with your doctor or consult a registered dietitian/nutritionist to discuss if there’s any value or risks in adding a supplement to your diet.

When should I pay extra attention to iron deficiency?

It’s important to have good amounts of iron in our diets at any age, but there are some phases when low intakes can affect us more.

For example, iron is a key mineral for a healthy growth and development, which is why it’s particularly important during infancy, childhood and adolescence. Moreover, from the onset of menstruation to menopause, people need extra amounts of iron-rich foods in their diets to compensate for the monthly losses of iron during menstruation.

During pregnancy, the needs for iron are also higher to increase the blood supply in the body and to support the healthy development of the placenta and the foetus. Iron deficiencies during this phase, can be particularly harmful to the growth and development of the baby.

Lastly, vegans and vegetarians also need to pay extra attention to their iron intake, as our bodies absorb less iron from plant-based foods than that from animal sources. If that’s the case, consult a registered dietitian/nutritionist or check your national dietary guidelines to plan a diet that includes enough sources of iron to meet your daily needs. 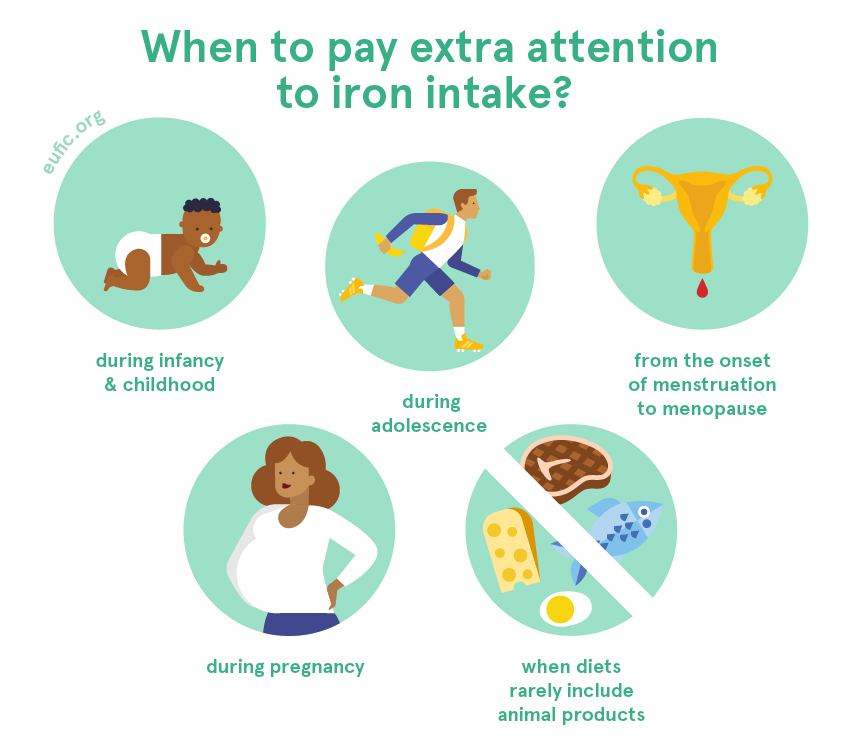