Zinc: Foods, Functions, How much do you need & more

Zinc is quite an important mineral to keep our immune system at its best. But did you know that it’s also involved with our senses of smell and taste?

Zinc is one of the trace elements, which our bodies only need in small amounts to keep healthy. We can find zinc in many animal- and plant-based foods; however, zinc from animal foods is generally better absorbed than that from plant-based foods.

What are the functions of zinc?

Zinc is present in every single cell of our bodies, affecting a wide range of different processes from growth, to the immune response, to reproduction. Our bodies use zinc to produce our genetic material (DNA) and proteins, to release hormones and to help our nerve cells carry messages (nerve impulses) between the brain and the body. 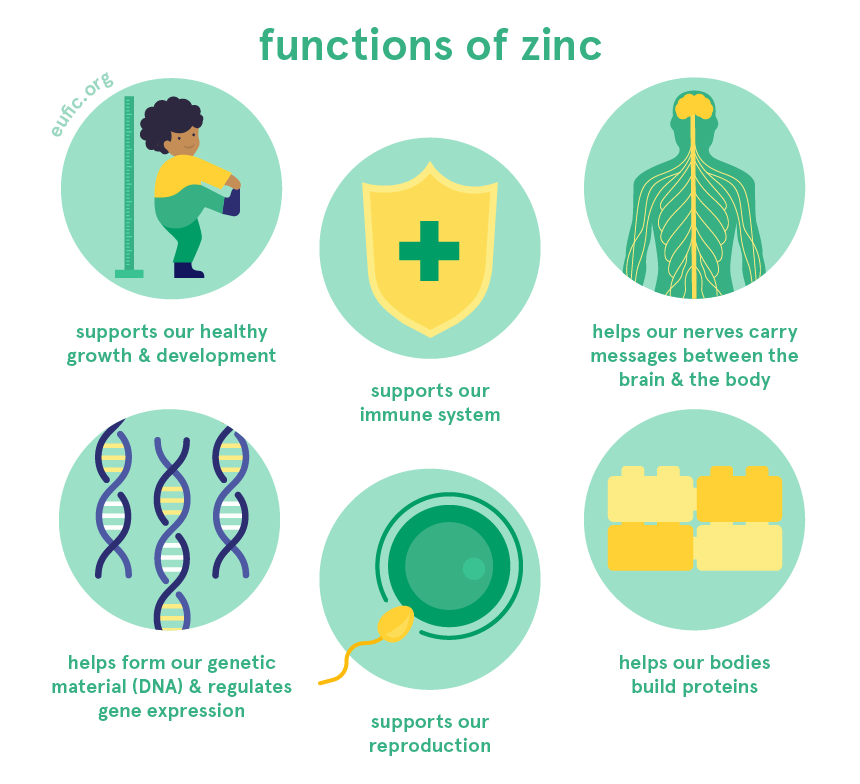 How much zinc do I need per day?

How much zinc you need per day changes according to your age, sex, life-stage and other factors such as the composition of your diet.

The DRV* set for healthy adults (over the age of 18) is between 7.5-16.3 mg of zinc per day, depending on if their diets are rich in phytates or not. This is because phytates, which are compounds found in grains and seeds of cereals, legumes and some vegetables, bind to zinc and prevent our bodies from absorbing it. Simply put, the more our diets are high in phytate-rich foods (such as whole-grain cereals and pulses) and low in animal proteins (which contain highly absorbable zinc), the less our bodies will be able to absorb zinc from foods; thus, the higher our needs will be for this mineral.

Usually, vegans and vegetarians need zinc in amounts towards the higher end of the range because their diets are rich in phytates and low in animal proteins. In turn, people who have diets rich in animal proteins and poor in unrefined cereals and legumes need less zinc in their diets and people with mixed diets fall in the middle of the spectrum. During pregnancy and lactation, the needs for zinc can be higher.

Following your country's dietary guidelines on a healthy and balanced diet will help you meet your needs for zinc. 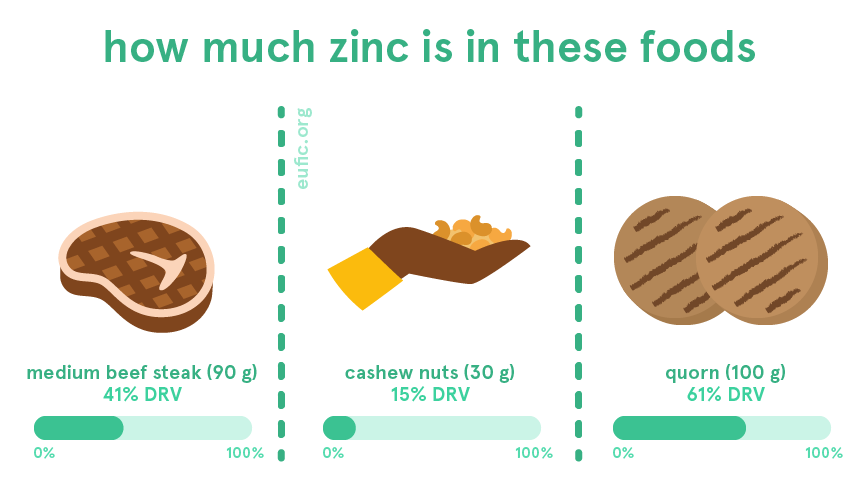 * These values are based on the population reference intake (PRI) estimates from the European Food Safety Authority (EFSA). They should not be interpreted as nutrient goals. To know more about the dietary reference values (DRV) in Europe click here.

We can find zinc in a variety of plant- and animal-based foods; however, our bodies absorb zinc from some foods better than others, depending on the amount of phytates they contain.

Foods rich in zinc, but with limited absorption include: 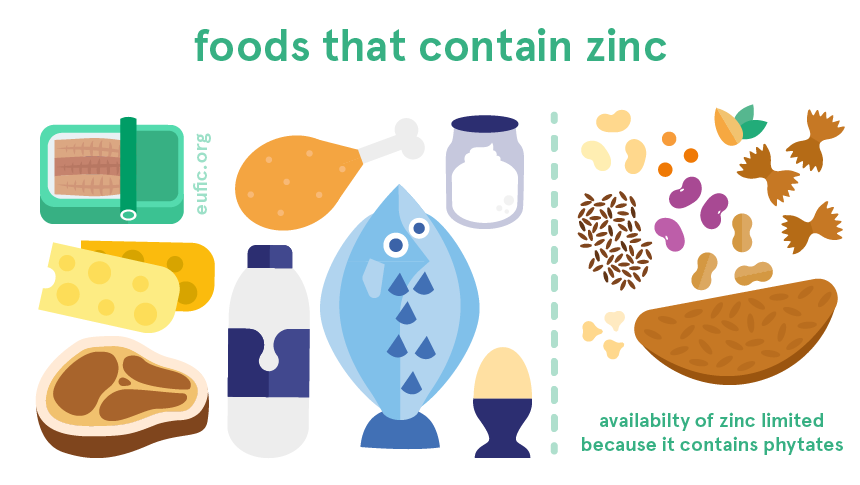 Does zinc interact with other nutrients?

High amounts of zinc can interfere with the absorption of copper in the body; however, it’s highly unlikely that we get excessive amounts of zinc through the consumption of foods alone.

Similarly, phytates also reduce the absorption of zinc in the gut, which is why diets high in whole grains and pulses, and low in animal proteins, are generally linked with lower absorption of zinc. However, this does not mean that you should avoid eating whole grain products, as they contain many important nutrients for your health.

What happens if I have too little zinc?

Zinc is involved in many of our bodily processes, which makes it hard to link specific health problems to zinc deficiency. For example, low levels of zinc can make us lose our appetite and taste, become more susceptible to infections, or take longer to heal wounds. However, these can also be signs of problems other than a zinc deficiency. In children, it can slow down growth.

Zinc deficiency is often caused by genetic disorders or specific health conditions that impair the absorption of zinc in our bodies.

What happens if I have too much zinc?

Zinc from foods is not considered harmful since it’s very unlikely that we get too much of it from foods alone. Nevertheless, healthy adults, including during pregnancy and lactation, are advised not to have more than 25 mg of zinc per day, which is about 3-4 times the recommended amount.

Regularly consuming large amounts of zinc, particularly through food supplements, can interfere with the absorption of copper and cause copper deficiency, putting us at risk of neurological problems.

Before taking zinc supplements, check with your doctor or a registered dietitian/nutritionist or consult your national dietary guidelines.

When should I pay extra attention to my zinc intake?

Zinc plays an important role in cell division and protein production, making it a key mineral to support periods of fast growth and development.

During pregnancy, infancy and childhood, it’s important to pay attention to our zinc intake since low levels of this mineral can impair the growth of the baby and increase their risk of infections. During adolescence, the needs for zinc are also higher, to support the fast growth that occurs during this age.

Vegans and vegetarians need to pay extra attention to their intake of zinc, as they need higher amounts of this mineral, compared to those who include meat and other animal proteins in their diets. 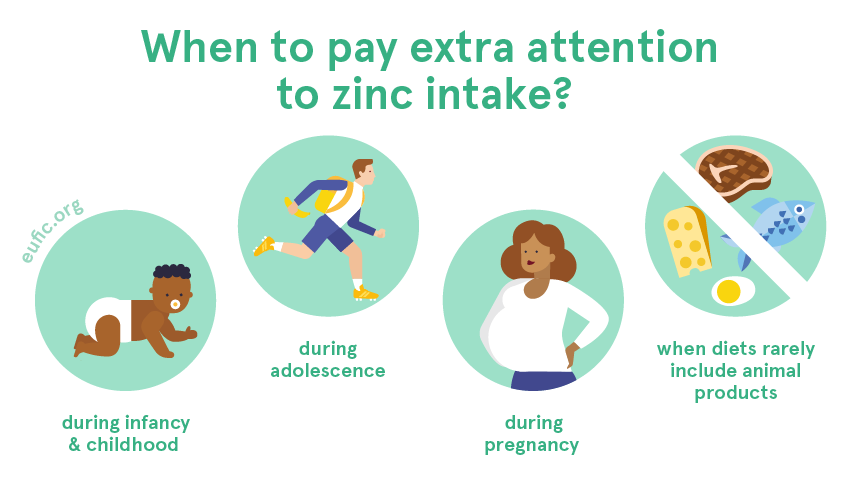